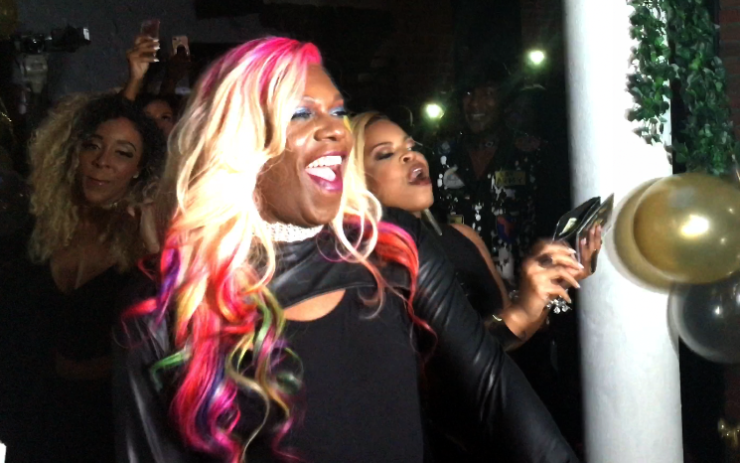 Big Freedia comes bouncing back with season 6 of her reality show, appropriately re-titled – “Big Freedia Bounces Back.” The docu-series has gone from 30 minutes to a full hour, an indication that Big Freedia is more in demand now than ever before.

According to Fuse TV, fans “have been begging us since the first season to make the show longer and we heard you loud and clear. The upcoming sixth season of Big Freedia will consist of eight, one-hour episodes.”

The Queen Diva did the local fans a solid, coming home to host a VIP Premier Viewing Party at the swanky Ace Hotel in downtown New Orleans. Fans had about an hour to hob-nob with food and drinks before Freedia arrived. The spread was replete with the star’s own booty-poppin potatoes, crawfish pie, muffulettas, fried eggplant and a never ending passing of fried oysters with a dash of hot sauce. To wash those delicacies down; Big Freedia’s own new sparkling rosé – Cá Di Freedia (Oltre Il Classico Cuvée). The rosé is available now locally and soon nationwide.

And then the Queen arrived in grand fashion, leading a band and second-liners, in bouncy blond tresses that were rainbow colored at the roots and the tips. VIP guests were led into a viewing room for an exclusive look at Season 6, followed by the diva’s new video for the track – “Dive” – in collaboration with Mannie Fresh.

When you so happy the way life goin ! And you do right by ppl and you can rest at night !! Family matters me my brother and my sister my ❤️❤️ Love them to the moon and back !! #blessed #youalreadyknow #bigfreedia #fusetv #worldofwonder season 6 we live baby ?

A day prior, the Queen of Bounce sat down with the host of The 504, Sheba Turk, sharing her exhilaration about the partnership with Fresh. “OMG, I’m so excited about our new single, ‘Dive,’ we’re two New Orleans artists collaborating. This gives us a chance to represent our hometown, but also giving the world something new and something fresh,” explains Freedia. The Queen Diva and Fresh are working on a soon to be released full album.

Turk also asked Big Freedia, “did you ever think it would last this long?” Freedia replied in her typical humble tone, “I honestly didn’t, I didn’t even think that I would have a TV show, coming from New Orleans and growing up on Josephine St., I never even thought I would be at this point in my life.”

The truth is, Big Freedia has made it! But she is not planning to let up on the grind anytime soon, if ever.

Other projects in the works are a cookbook and a brand of hot sauce.

When two Queens link @bigfreedia ? be sure tune into #BIGFREEDIABOUNCESBACK

Last night’s premiere party was FABULOUS!?This has been one hell of a journey, but I’m super excited to be a part of Season 6 Big Freedia Bounces Back! Super great vibes and major blessings to continue. Thanks everyone for growing with me!✨? (Images from nola.com) #TheDivaReturns #bigfreedia #satcheljoseph #noladancers