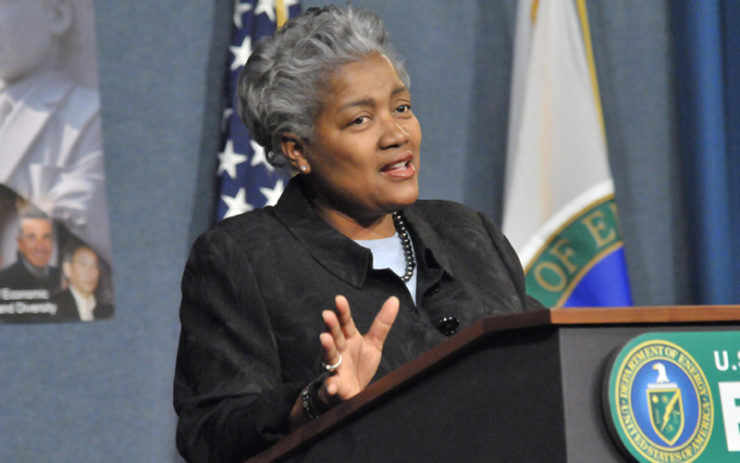 Donna Brazile on ‘The View’ to discuss new book today

Donna Brazile on ‘The View’ to discuss new book today

Donna Brazile shared a scandalous excerpt on Politico.com from her new book about the rigging of the Democratic primary election for President of the United States. In it, the former chairperson talks about how and when she learned the of the party’s recent insolvency, its backdoor deals and an agreement with the Hillary Clinton campaign before the DNC chose a candidate.

“Hacks: The Inside Story of the Break-ins and Breakdowns That Put Donald Trump in the White House,” is available today from Hachette Books. Here is how Brazile described her anticipation of sharing the shady findings with Senator Sanders in the book. “Before I called Bernie Sanders, I lit a candle in my living room and put on some gospel music. I wanted to center myself for what I knew would be an emotional phone call,” Brazile recalls. She goes on to say, “I had promised Bernie when I took the helm of the Democratic National Committee after the convention that I would get to the bottom of whether Hillary Clinton’s team had rigged the nomination process.”

Brazile’s words sent ripples through the democratic party and the American political landscape in general last week. Sanders supporters would say, “we told you so” and many in the GOP would change their tunes about Brazile, now calling her ‘truthful,’ not ‘dishonest’ as they had during the election. Today, Brazile sits down to discuss the new book with the ladies from “The View.” (“The View,” Tuesday, November 7th, 11:00 am E/10:00 am C on ABC.)

We won’t be distracted from your efforts to give billionaires tax cuts, take health care from millions and deny climate change. Do your job. https://t.co/35eWaiMuYt

Brazile’s book claims that as DNC head she was powerful enough to swap out Clinton for Biden—but had zero power over Dems’ failed strategy.

Donna Brazile is now in an underground bunker in an undisclosed location and hiding from Hillary after this: https://t.co/a336tvjnj4

Nikole Hannah-Jones on “The Opposition with Jordan Klepper”

Mavis Staples on “The Late Show with Stephen Colbert”

Donna Brazile on “The View”

Kofi Siriboe on “The Real”

Carla Hall on “The View”

Van Jones on “The Daily Show with Trevor Noah”