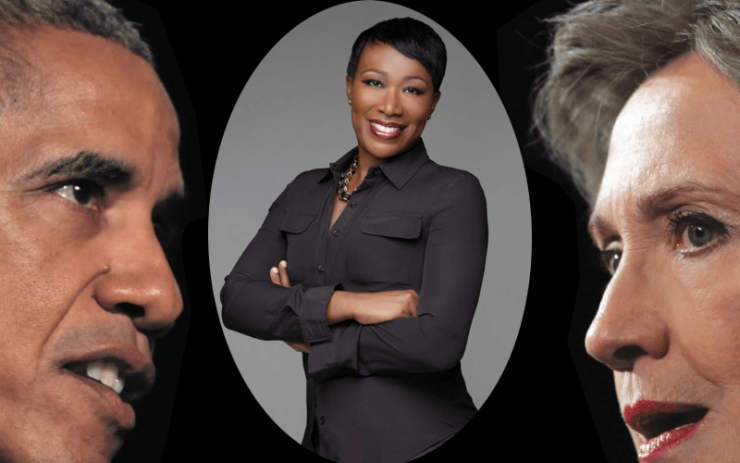 Joy-Ann Reid on the ‘Fracture’ Between Hillary and Barack

Joy-Ann Reid on the ‘Fracture’ Between Hillary and Barack

Did the Clintons and President Obama make a deal for his support? Joy-Ann Reid makes the case in her new book, "Fracture."

Today’s news cycle is quick. Crazed mass shooters gun down innocents weekly. Black bodies are murdered and left to die via viral video. And silly posturing during the current presidential election appears to be the new normal. MSNBC correspondent Joy-Ann Reid helps us sort through this mess daily and now offers more of that deep insight and context in her new book, Fracture: Barack Obama, the Clintons, and the Racial Divide (Harper Collins).

“I wrote Fracture for non-political junkies and infused the book with a lot of references to the culture.”

Covering race in politics, particularly Democratic politics, from 1964—a pivotal year for the expansion of civil rights—to current day, Fracture does all of this through the lens of examining “the complicated relationship between President Barack Obama and Bill and Hillary Clinton.”

Reid weaves together six decades of American party politics, while simultaneously looking at what was happening in American popular culture. “I wrote Fracture for non-political junkies and infused the book with a lot of references to the culture,” she shares with DailyCommune at a New York Public Library event to promote the book. “The fact that the Beatles had their big night on Ed Sullivan right at the time [Congress was] debating the Civil Rights Act of ’64, Peyton Place was on TV at the same time.”

Reid notes how these distractions shifted any focus away from what was happening in American streets where “black kids were getting the hell beat out of them in the South.” Because most Americans were primarily getting their news from their local 6 o’clock broadcasts, northern white Americans had no idea of the atrocities that were happening down South.

At this time, Hillary Clinton was a Goldwater Republican and President Lyndon Johnson was splitting with the Dixiecrat-ruled Democratic Party by pushing President Kennedy’s Civil Rights Act.

Reid explains how “The Harvard Crimson ran an interview with top Republican strategists who predicted that because of all the civil rights wrangling within the [Democratic] party with African Americans pushing, that with the sadness and despair over Kennedy being killed, and the fact that the Civil Rights Act was still trying to make its way through Congress, the new president coming in would lurch so far to the left that ultimately the Democratic party would be nothing but northern Scandinavians, Jewish New Yorkers, black people and whatever American hating liberals were left.”

“Black Twitter is Jet [Magazine]. Black media has always been more advocacy oriented. Jet used to be the newspaper of record for Black America, we think of it now as the ‘beauty salon’ magazine, but it used to be a serious news magazine.”

Fracture provides readers with a clear vision of that initial fracture within the Democratic Party through the latest subtler rift between Hillary Clinton and President Obama, and how race has played a part in every era of politics. Today, the Republican Party is 90 percent white. On the other hand, the Democratic Party is multi-racial, and, as Reid confirms, it is almost exactly the party The Harvard Crimson survey predicted, “without the disparaging cast of those comments.”

The most intriguing question to be answered by Fracture is whether there was a back door deal between the Clintons and Barack Obama for their support of his presidency. Reid seems to think so. In Fracture Reid writes, “People who had been allies of the Clintons from the beginning believed that even accepting the role of secretary of state in the Obama administration was a step along the path and was what one supporter called ‘a quid pro quo.'”

Reid also looks at differences in today’s political climate compared to a pre-social media era. She shares, “Black Twitter is Jet [Magazine]. Black media has always been more advocacy oriented. Jet used to be the newspaper of record for Black America, we think of it now as the ‘beauty salon’ magazine, but it used to be a serious news magazine.” She further comments, “Online media has taken on an incredible power, because if you think about it, [Congressman] John Lewis was #BlackLivesMatter when he and those young guys who were in their 20s were doing their version of the same thing, [but back then] they had to write letters. Now these movements go through the speed of light, both though online and social media.”

Staying true to its bid for non-political junkies, Reid also has a couple chapters in Fracture dedicated to ‘All in the Family,’ a nod to the larger than life TV racist Archie Bunker, and one on Kanye West. Reid writes, “The Bunkers were more than a sitcom family. They embodied white America’s quiet anxieties about race, integration and neighborhood change, gender, sex, and the war. For the Democratic Party, Archie represented the America they were losing, and not just in the South, but also in the Rust Belt and the Northeast, who like their southern counterparts, resented the federal housing mandates and busing to end school segregation in the suburbs of cities like Boston, Philadelphia, Chicago, and New York.” Forty-three years later we see Donald Trump stirring these same anxieties.

Chapter 5 is all Kanye. In 2005, the Red Cross had organized a telethon to raise funds “for the victims of Hurricane Katrina, which had violently struck coastal Louisiana and Mississippi a week before, killing more than 1,800 people, many of their bodies floating down rivers of mud,” Reid writes. West appeared on a live NBC television telethon with Mike Meyers. The studio was on high alert for any profanity that might come from the rapper. Perhaps they understood the politics of his lyrics or just that he was a highly emotional rapper who was difficult to control. What they got was far worse than they could have imagined. West would go on to say on live television “George Bush…doesn’t care…about black people.” Race, which had been too taboo to talk about, had taken center stage as a result of one of the most catastrophic events in modern world history, and juxtaposed a rapper and the President. “George W. Bush, in his memoir would later describe West’s rebuke as the worst moment of his presidency. Worse than the terrorist attack on September 11, 2001. Worse than any day during two land wars. Worse than the day Hurricane Katrina tore New Orleans apart,” Reid writes in Fracture.

Fracture brilliantly traces historical events to show how race has played a part in policy, political deals, the Democratic Party, and the media from 1964 to…well, we’re waiting to see evidence of that deal between Obama and the Clintons.