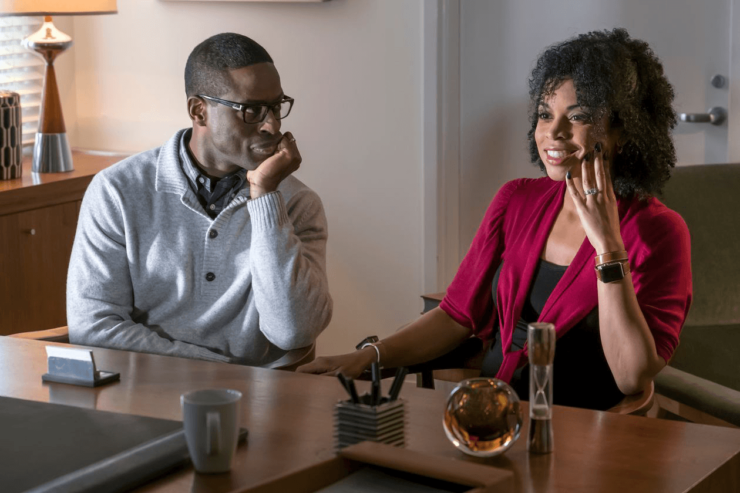 “This is Us” has wholly dominated Tuesday night ratings since its debut last year. The show’s cast, which includes Susan Kelechi Watson, has been lauded for consistently compelling performances. Watson plays Beth, the wife of Sterling K. Brown, who won the Primetime Emmy for the leading drama actor in “This is Us.” Praise for her understated, yet reliable performance has continued to grow.

Maggie Fremont of Vulture.com referred to Watson as “the real MVP of the show’s present-day timeline.” She describes Watson’s character Beth as, “one half of one of TV’s best marriages, but she can also stand on her own. She is loving, loyal, self-assured, smart, gorgeous, and she’s even got some jokes.” The Brooklyn native, who is a graduate of Howard University, has starred in NBC’s “The Blacklist” and “The Following” on Fox. Sharp-eyed viewers will remember Watson as, Janet, Louis C.K.’s ex-wife on his eponymous Netflix series.

Tyler Perry on “The Talk”

Michelle Hurd on “The Real”

Gabrielle Union on “The View”

Karreuche Tran on “The Real”

Jay Pharoah on “The Talk”

Michelle Williams as guest co-host on “The Talk”

Kim Fields on “The Real”

Garcelle Beauvais as guest co-host on “The Talk”

Judge Greg Mathis on “The Real”

Carol Anderson on “The Opposition with Jordan Klepper”

Susan Kelechi Watson on “The Talk”

Garcelle Beauvais as guest co-host on “The Talk”

Tiffany “The Budgetnista” Aliche on “Harry”

Tyler Perry on “The Real”

Diamond White on “The Real”

This Is Us – Aftershow: Season 2 Episode 4 (Digital Exclusive – Presented by Chevrolet)

Susan Kelechi Watson with Sterlng K. Brown at the Emmy’s