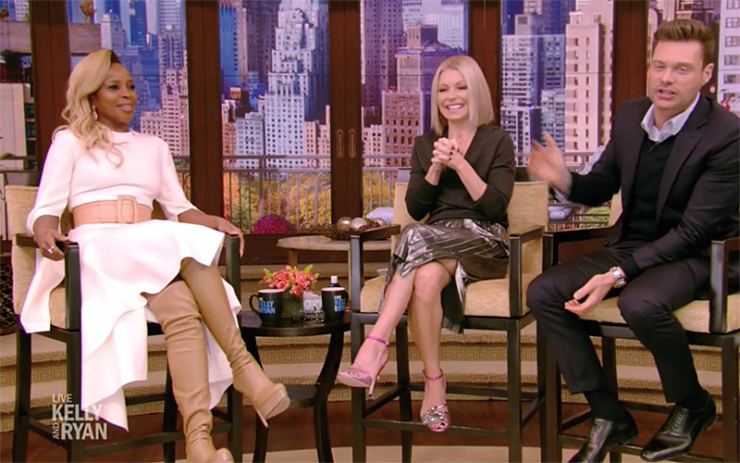 Mary J. Blige sat down with Kelly and Ryan to talk about her new movie, "Mudbound."
0
Share
2
Love
Share

‘More Drama’ for Mary J. Blige on the Big Screen

‘More Drama’ for Mary J. Blige on the Big Screen

Mary J. Blige is not letting the drama of her personal life keep her from making good music and landing dramatic movie roles. Recent headlines about Blige’s ex-husband demanding more spousal support is not affecting the singer’s momentum. This week, the ‘No More Drama’ diva is making the rounds to talk about her new film, “Mudbound.” Directed by Dee Rees, lauded for her work on “Pariah” and HBO’s “Bessie,” “Mudbound” is about two men who return home from World War II to work on a farm in rural Mississippi, where they struggle to deal with racism and to adjust to life after the war. The Queen of Hip-Hop Soul is no stranger the big screen; she appears most times as a stage performer than as an actress, like her 1st appearance on the 90’s television favorite “New York Undercover.” But “Mudbound” is different. Blige gets to exercise her acting chops and explore the many layers of Florence Jackson, the mother of one of the soldiers. She shared with Indiewire, “I want to be in films where I can express myself through my truth and through my trials and use this as a therapy just like I use my music.”

The film’s soundtrack features Blige’s original song, “Mighty River,” written by herself, Raphael Saadiq, and Taura Stinson. Blige’s new LP, “Strength of a Woman,” is also available in stores, for download, and at streaming services now. “Mudbound” will release on Netflix November 17th and in a limited release at select theatres in Atlanta, Boca Raton, Boston, Chicago, Houston, Los Angeles, Nashville, New York City, Philadelphia, San Francisco, and Washington, DC on the same date. Be sure to catch Mary J. Blige this week on “Live with Kelly & Ryan” and “The Tonight Show Starring Jimmy Fallon,” Monday and on “The View,” Tuesday.

All Black artists on this week of television talk shows:

Jaden Smith on “The Late Late Show with James Corden”

Andra Day on “The View”

Common on “The View”

Jenifer Lewis on “The View”

Tyler Perry on “The Late Show with Stephen Colbert”

2 Chainz on “The Daily Show with Trevor Noah”

Mary J. Blige on “The View”

Kevin Frazier on “The Talk”

Lonnie Chavis on “The Real”

Ludacris on “The Late Late Show with James Corden”

Micahel Yo on “The Wendy Williams Show”

Jordan Peele on “The Daily Show with Trevor Noah”

T-Pain on “Watch What Happens Live”

Tyler Perry on “The View”

Big Boy on “The Talk”

Ashanti on “The Real”