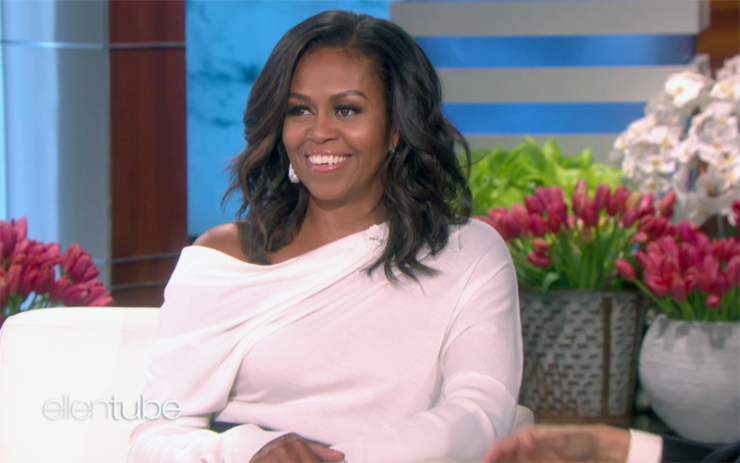 The last time the first lady visited Ellen, who is hardly ever on good behavior, they went on a rare CVS shopping trip while President Obama was still in office. That impromptu trip ended with Mrs. Obama pushing Ellen, flanked with the Secret Service, and a basket full of half-opened products out of the store. (See video at bottom of article)

In a Twitter post on Tuesday, Ellen wrote, “I knew my 60th birthday show was gonna be fun, but I didn’t know it’d be this fun. See it all Thursday and Friday.” The post accompanied a smiling image of Ellen, Mrs. Obama, and actress Jennifer Anniston, who appears as a guest on the Friday birthday special.

I knew my 60th birthday show was gonna be fun, but I didn’t know it’d be this fun. See it all Thursday and Friday. @MichelleObama pic.twitter.com/fwcdEXrino

“The Today Show” previewed a clip of Mrs. Obama’s Thursday appearance as a part of their ‘Pop Start’ segment this morning. The sneak peak teased the reveal of what was in the blue Tiffany & Co. box presented to Mrs. Obama, from the lady who would be stepping into the role she was relinquishing (caught that shade?). “Never before do you get this gift, so I’m sort of like ‘OK. What am I supposed to do with this gift?'” the Harvard lawyer to Ellen. “And everyone cleared out and no one would come and take the box. And I’m thinking do we take the picture with it?” Mrs. Obama continued. “And then my husband saved the day…see he grabbed the box and took it back inside.”

Michelle Obama & Ellen DeGeneres on a trip to CVS

Thursday’s interview with Ellen is Mrs. Obama’s first television interview since leaving the White House. She and her husband, President Barack Obama, inked a book deal reportedly worth $65 million. The world looks forward to hearing how this brilliant couple continues to make the world a better place through their continued sacrifice and intellectual perspective.