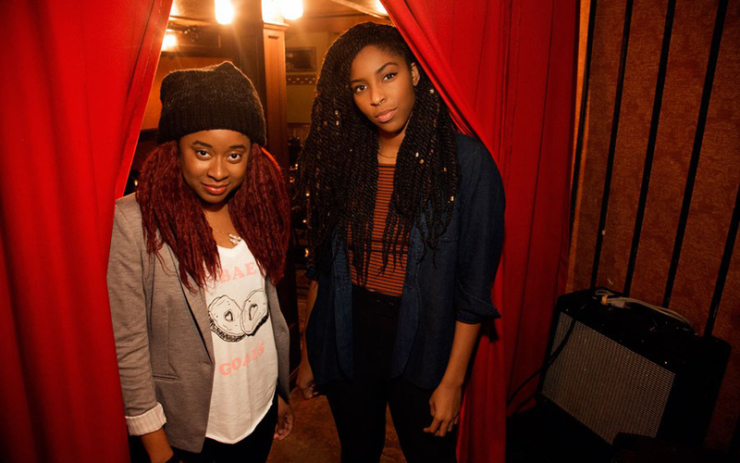 The podcast “scene” has been a thing for a minute now, and is growing. No matter if you’re new to it or not, we have something to tickle your ears: it will make you guffaw in your car, sniggle while walking down the street, or snot-laugh on the subway so people can turn and side eye you. Yeah, right. If you’re in New York City, no one will give a damn.

But seriously, “2 Dope Queens,” produced by WNYC Studios, is a podcast helmed by Jessica Williams, a writer and performer best known for her work on Comedy Central’s The Daily Show, and Phoebe Robinson, a stand-up comedian and writer for MTV’s Girl Code— just two young comedians living in Brooklyn, straight up riffing on their lives as 20-and 30-something-black women today.

“We’re the main characters of our own stories.”

For the last two years, the duo has been putting on a live stand-up and storytelling show at Union Hall in Brooklyn with more intimate—and always hilarious—conversations between the ladies offstage. The podcast is meant to be an inside track to those off-the-cuff conversations, which involve everything from Kanye’s Twitter rants, racist cab drivers, hair, sex, politics (and wanting to hook up with Martin O’Malley???) and lots and lots of lotion, specifically cocoa butter.

The two met a few years ago on the set of The Daily Show, where Jessica, 25, acts as the national “race correspondent” and Phoebe, 31, who had been working for years as a stand up comic, invited her to co-host her “Blaria” show (black Daria, named for the sardonic cartoon, Daria, from the 90s).

“Naturally our interests – sex, gender, race, which I cover on the Daily Show – crossed,” Jessica notes, saying the two immediately hit it off.

Or, to use a metaphor: “You know when you go on an awesome first date and you’re like we’re going to fuuuuuuuuck tonight?” asks Phoebe, “well, that’s how it was when we met.”

Jessica describes the combination as a “perfect marriage” and says that they just go up and talk about their week, and usually don’t tell each other what they’re going to say until they’re onstage or in-studio, giving the show a true improvisational feel. Both Queens are alumnae of the prestigious Upright Citizens Brigade, an improv comedy troupe that has graduated badass comics like Amy Poehler, Donald Glover and Aziz Ansari.

But more than being on a mission to make us laugh, this hot cup of two are serious about bringing and showcasing diverse comedic voices to their show.

“We’re like, there’s so many talented people from the city who don’t get the opportunity to perform because people don’t think about them. And so we always make a thing where we’re going to represent the full scope on New York communities.”

“2 Dope Queens” is available on iTunes. Episodes from Season One will continue to be released every Tuesday through June 14.

Tune into “Pizza Boyfriend” today, to hear how Phoebe is hit on while buying a slice, but, um, dude’s girlfriend is standing right there! Plus, Rae Sanni idolizes Monica Lewinsky, Chris Thayer reveals his favorite sex tip, and Nore Davis tells the spooky story of a gay ghost.