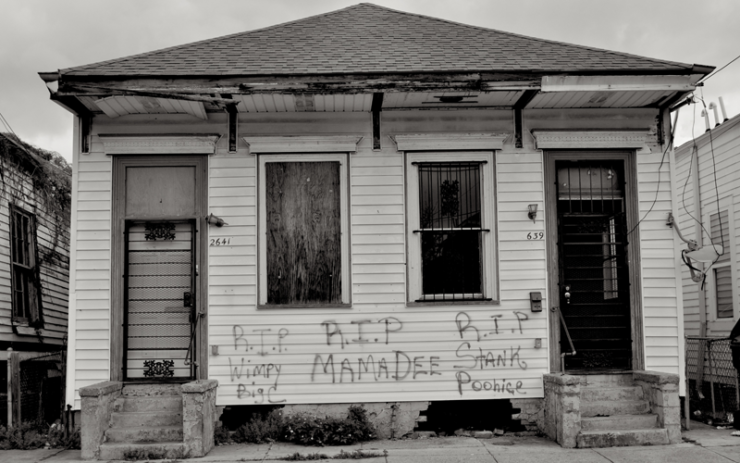 The remarkably resilient city of New Orleans is celebrating its Tricentennial with grand celebrations of cultural and historical significance all year long. As always, tourists will pour in and out of town to experience the best music festivals, major sporting events, and in some cases, just to feel that joie de vivre they have come to adore. For those who traverse to the Crescent City this year, they do so inside of a huge 300th birthday party.

But imagine if when they arrive, there are none of the imprints of the city’s rich African heritage and no jazz; there are no Black Indians and no gumbo. Dr. Fari Nzinga thinks 300 years is an opportune time to say “thank you, black people!” The New Orleans based anthropologist and emerging curator has assembled a magnificent group of seventeen artists for her new show, “The Rent is Too Damn High!“. Borrowing the phrase coined by viral sensation, Jimmy McMillan, the rent is not a literal rent, but the high costs of the gentrification, displacement, and alienation.

The exhibition opens April 7th at the Crescent City Boxing Gym with a mock mayoral debate between the historical figures, Marie Laveau, Rose Nicaud, Thomy Lafon, and Juan St. Malo, who will outline their platforms and visions for New Orleans’ next 300 years.

Dr. Fari Nzinga recently spoke to DailyCommune editor-in-chief Derrick Hemphill about her new exhibition addressing gentrification and the notion of home – “The Rent is Too Damn High!”

Derrick: What is the central theme for “The Rent is Too Damn High!”?

Dr. Nzinga: The idea behind “The Rent is Too Damn High!” is to create a space to celebrate the Tricentennial of New Orleans but to do so critically through the perspective of the black people in this city who have inherited that 300-year legacy. It explores the idea of home, the idea of tradition and cultural transmission, but also the idea of transformation. How does your home change and become different? How do you become different such that your home doesn’t feel the same anymore?

Why do you think ‘home’ was essential to talk about for the 300?

When I was trying to keep up with all of the things that were going to be happening in celebration of the Tricentennial it seemed as though it was a rather sanitized official narrative, one that was more so interested in attracting tourists than really speaking truth to power. How can you celebrate New Orleans and not say, “Thank you, black people. You made everything about this city that people love”?

Do you mean culturally?

“Thank you, black people. You made everything about this city that people love.”

I’m hopeful that because we are using art and creativity, the exhibition brings people together. That folk won’t be stuck in their class, racial, or ideological positions. It’s about the colors, the shapes, the movement. It’s about the feelings, the ideas.

Which pieces captivated you? Which did you think would be perfect for the show.

Well, one thing I love is KD Lewis’ black and white abstract pieces. So many people believe that black art is very figurative and literal. I wanted to make sure to incorporate abstraction and say, “That’s also part of our creative tradition, and that’s also a language that black people speak visually.”

I love her figurative pieces as well as her abstraction.

Of course I absolutely adore the work of Ayo Scott. He was the first artist that I went to, and I was like, “Look, if you don’t be a part of this then I don’t even want to do it,” so no peer pressure. (She laughs)

It’s really about how the nonprofits have created space for people to serve our community while displacing the original folks who have been doing this work for decades and generations.

What work is Ayo Scott submitting?

He’s submitting a painting, as well as a mixed media piece where he is painting on an old headboard and creating a bed out of kind of found objects. Again, that goes back to the notion of home. Home is a place where you’re supposed to feel comfortable and safe. In deconstructing this bed, he’s playing with that idea and asking, “Is home the place where you feel the safest?” I’m excited about that mixed media piece.

I’ve heard a lot about Ayo Scott’s artwork. Anyone else?

Yes, I was also really excited to incorporate Kristina Robinson’s installation. She’s going to be creating an altar that’s an outgrowth of a performance art piece where she’s created the character named Maryam de Capita. In it, she’s speculating what would’ve happened had the uprising in 1811 been successful and had the enslaved people been able to emulate the type of revolution that took place in Haiti. She’s calling this area ‘De Capita 504,’ a free zone. It’s a place where the types of oppression and systems of domination that we are used to don’t exist because of this historical event.

Yes, what would an artist coming from this alternative history be doing and what would she be thinking? How would she be expressing herself? The altar is an outgrowth of that project.

Did you learn anything from these artists, either in your friendships or preparing for this show, as it related to their displacement by Hurricane Katrina?

That’s a conversation that Kristina and I have had several times. It’s really about how the nonprofits have created space for people to serve our community while displacing the original folks who have been doing this work for decades and generations. It’s a challenging conversation because as an artist and a creative a lot of your gigs come from those non-profits. On the one hand, you’re thankful for those opportunities and collaborations, while on the other hand you still don’t have the same access to resources or extensive networks.

Do you think then that the resources as it relates to funding are still not in the hands of black people who have been doing this work?

Just looking at the structure of who’s on the board, who’s in the executive leadership, and then who’s doing the on the ground work. A lot of times there’s a racial divide, and a gendered one as well. The arts are so tethered to the nonprofit system.

I understand the opening will include a mock New Orleans mayoral election and debate?

Yes, I’m excited about it because I’m having four performance artists play the roles of different historical figures. They’re going to be moderated by Andreanecia Morris, who’s the executive director of Housing NOLA, who does a lot of work around the issue of affordable housing. We’re looking at these four figures as though they were running for the mayor of New Orleans. Here we’re playing with the idea of space and time.

Are the issues they’ll debate new ones?

No, the issues that we’re confronting now are not new. They may feel fresh or different based on the circumstances that we’re dealing with, but when you have Rose Nicaud and Thomy Lafon and Marie Laveau and Juan St. Malo up there saying, “Hey, we’ve been dealing with oppression and systems of domination for centuries.” How can we take some of their wisdom and some of their insight and use it and apply it in our day and age?

Marie Laveau, how intriguing! How did you decide which historical figures to include?

I let the performers decide who they wanted to embody from a list of people I compiled. The list included figures I encountered through my studies of New Orleans history that I thought people should know. I felt like this would make for a more authentic performance. Plenty of folks have heard of Louis Armstrong, and plenty of folks have also heard of Marie Laveau, but do they know her outside of being the ‘Voodoo Queen’?

Will they mostly debate housing in 2018 or other issues?

Housing is the obvious question for, ‘The Rent is Too Damn High!,’ but I’m also looking at issues that go beyond housing. Issues like, how do we hold elected officials accountable to their constituencies, how do political, economic conditions open up possibilities for artists and for everyday people to live better lives? I’m thinking about the rent not just as the real bill you pay for the housing that you occupy, but I’m also thinking about it in the vein of James Baldwin’s “The Price of the Ticket.” What’s the cost associated with living here under this skin having inherited this legacy and their 300-year history?

So, the rent can mean a lot of things?

Yes, whether that’s a physical cost, an emotional cost, cost in your pockets. Whatever that is, how do you express that and then how do you continue to create in spite of it?

Is there anything you could tell me about any of the other three mock candidates?

Yes, I am excited that Juan St. Malo is going to be included. He was a Maroon society leader just outside of New Orleans proper. St. Malo had a whole interracial community of people that lived out in the swamps. He had some African folks. His society included the first Asian people to live in this area, which were from the Philippines. They had been I think defectors from the Spanish Navy when the Spanish were trying to take over everything. St. Malo’s and his band of people were resisting imperialism and oppression, but he ended up giving his life. His head was on a stake, the same consequence of so many revolutionaries in colonial Louisiana. I’m excited that more people will be able to know more about his story.

Nice. The exhibit takes place at a boxing gym. How did you choose this location?

I chose the location because I had access to it. It’s a black-owned space. The owner, Al Smith, is interested in not just using this space for athletic activities, but also opening it up to more diverse types of community-based programs and events. He saw what I was trying to do and the value of it. I wanted this to be an opportunity for people to get to know him and this space, and also a chance to celebrate black people in New Orleans and from New Orleans who are doing fantastic work to make this a better city.

That’s awesome. What else do you want potential visitors to know about ‘The Rent is Too Damn High!’?

I want people to come to the opening reception for sure, but we also have a series of programs that will take place during the run of the show. The exhibition will be up from April 7th to May 6th. Throughout that time we have panel conversations about the cultural economy and gentrification, we have a teach-in to learn more about New Orleans’ revolutionary history. We’ve got a screening featuring New Orleans actors and writers and filmmakers. I hope that people will continue to come back and engage with the art, with the artists, and with the ideas. The point is not just to philosophize about the world but to change it.

Well, there you have it, ladies and gentlemen. Dr. Fari Nzinga.

Thank you. Thank you so much for the opportunity.

For tickets – ‘The Rent is Too Damn High!’